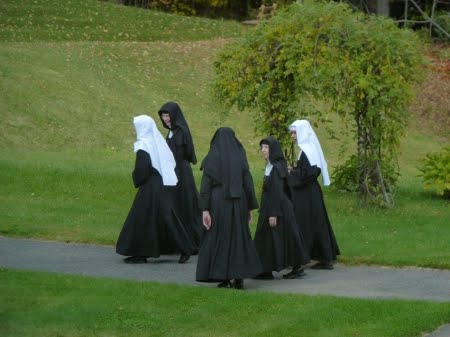 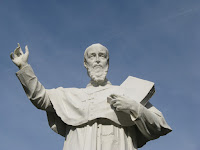 "If you have the love of God, do not be troubled or anxious about the exercise of the other virtues.  For you will not fail to practice them when the opportunity presents itself."

Posted by Sister Margaret Joseph at 2:46 PM No comments: 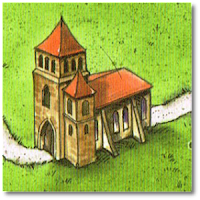 Perhaps it is time to take a break from deep theology and just share a little story with you.  On some holidays and other feast days we have the opportunity to play games together and recreate for longer periods.  These opportunities open up a whole new group of games (since we don't need to be finished within a 45 minute time span)

When I entered I brought with me a game entitled "Carcasonne".  It is a German game in which the playing board is built piece-by-piece as you play.  The tiles match sort of like a puzzle and then there is the opportunity to "claim" a road, farmland, a city, or a monastery.  I must admit that one of my favorite tiles to pick up is the monastery because then I get to be a nun!  There are a number of different strategies and the points can get a little confusing, but nothing is settled until the very end of the game.

When I was first in discernment I had gotten to know a few communities who were not permitted to play any games that had winners and losers as there was a fear of vices coming through with competitiveness.  As Visitandines we are permitted to play these games in hopes that a gentle spirit of sisterly love will be the first goal in the game and winning or loosing only a secondary objective to help create that fun atmosphere.  That being said, this game can be played either way!

With my experience of these other communities, we created new rules to Carcasonne in which each
color player belongs to a particular religious order instead of to a player.  When "claiming" a city, you can then decided either to give it some Dominicans to teach or some Sisters of Charity to care for the sick. You can give the grasslands to the Trappists to farm or to the Little Sisters of the Poor for their begging.  The Monasteries.. well I must admit they always seem to be populated by Visitandines!

One of the sisters played this game with me and the rules (the regular rules) state that once an area is claimed it cannot be shared by another player.  We were a bit troubled that a large city could only take care of either the poor OR the sick!  And then there was the retreat houses?  How could those be established?  As we played with our new rules, things became more flexible.  A small city might actually be an area of hermitages for retreat and could be populated by as many different religious as tiles (still maintaining the rule that only one playing piece could be placed on the board each turn).  And so the game became a joyful exercise in charity!  How could we get as many religious on the board as possible, allow them all time for retreats, AND help all the little towns to be cared for!
Posted by Sister Margaret Joseph at 9:18 AM No comments:

Here we are!  Simplicity.  the last of the three "little virtues" which St. Francis de Sales speaks of as so important to a Salesian spirit.  In my own prayer, as I mentioned in the first 'little virtues' post, this one seems to tie the first two together.  You present yourself in honesty and openness (now that you have the humility to accept yourself as you are and as God sees you) and interact with others by seeing them the same way.

Father Dailey, in his book Live Today Well, also noted three main areas of simplicity: our dress (or exteriors), our speech, and our thought.

Dress: I should hope this speaks for itself.  Try to dress in what speaks of who you are.  If you are a princess, then it is right that you should dress in nicer clothes (while not going over the top).  And if you are not, well then dress more to your current state.  It would seem absurd to go on a hike in an evening gown or to a ball in your hiking clothes, yet we often do this in little ways when we try to impress through our clothes or show a "humility" by dressing in a way that is less.

St. Francis de Sales was very practical.  One story which I love to share in this matter was a very early meeting of Jane and Francis.  They were at dinner at St. Jane's brother's house.  She had on a lovely black dress with tassels.  Francis knew of her intention not to re-marry and so commented that the "advertisements" were not necessary.  She promptly took our her scissors and cut them off!  She was a lady of means, but had a little more excess than was needed in her dress, something which might attract the attention of men, while stating that she wished to belong to God alone!

Speech: I often think of children when thinking of simplicity.  They do not analyze how a sentence or thought will be perceived before they speak (often to the embarrassment of their parents).  When I worked in a nursing home we used to comment that if you want the truth about something ask either a child or one of the elderly.  One has not reached the phase of hiding or over-analyzing and the second is past that.  So, to try to speak with simplicity, honesty, and openness in the years between is key to being simple.  We speak what we know God would wish us to say, are able to laugh at ourselves, and help others by seeing them as God sees them.

Jesus never refrained from speaking even when He knew this might turn people away or cause them to dislike Him.  Just think of the Bread of Life discourse!  He could have apologized or clarified His teaching to keep people from leaving at the boldness of His statements, but instead He turns to His disciples, "Will you also leave?".

Thought: Simplicity also dives into our prayer life.  St. Francis de Sales says here too we must be realistic and try not to over-react (or under-react).  He says, "Often one lets himself be knocked down by a gnat when he combats monsters by imagination" (Oevres, vol 26, p 36) This saying points to how often in prayer we can conjure up these ideas of doing wonderful things for God, big projects, sacrifices, works of charity... but all these are actually not within our reach and not practical for our state of life.  We think we are doing something great by having these aspirations, while in the meantime a little inconvenience sends us into an angry rage or a look from another brings our mind where we would rather not go.  True holiness lies in not getting upset during the traffic jam or giving time to a friend in need when you have 12 other pressing items on your plate.  St. Francis de Sales says that we should first battle in the arena of our every day lives for here are the opportunities God has provided for our holiness.

Posted by Sister Margaret Joseph at 2:44 PM No comments:

Last week one of the Gospels was the story of Jesus expelling demons from a possessed man.  The priest who came that day, Fr. Cambra, MIC, proclaimed the Gospel with such clarity that it highlighted our Lord's gentleness.  I thought of St. Francis de Sales' quote:

"Nothing so strong as gentleness, nothing so gentle as real strength".

How did he do this?  Father always proclaims the Gospel with inflection and, when appropriate, enough variation in his voice to signify the different speakers.  As he proclaimed the section in which the demons were speaking, his voice was louder and angry sounding.  He even sounded as if accusing Jesus negatively of "know[ing] who He [is], the Holy One of God".  Jesus rebukes the demons.  Here I expected a sharp response.  A rebuke seems to demand that same forceful punch, and yet father did something completely different.  His voice changed to a soft, gentle tone, that same calm peacefulness you would use when instructing a 4 year-old. Slowly and quietly, but directly and firmly, he spoke, "Quiet.  Come out of him".

This gentle firmness is that real strength our Holy Father (St. Francis de Sales) speaks of...for it even expels demons!  Jesus first knows who He is, the Son of God, and calmly responds to who these demons are and what their proper place is.  He also shows love and care for the soul of the man who is possessed.  This gentle strength shows that gentleness is not being a push-over, or hiding in the midst of contradiction, but remaining calm in the face of difficulties and challenges.  It is loving others as they are and helping them to see who God has called them to be, AND helping them to be that person.  This is true love of neighbor.

When one enters the Visitation, one of the first things to learn is the new language.  This is a language of gentleness.  When a "command" is given, it is generally phrased as a gentle nudge..

In other orders those same directive would likely be given in a much more direct manner:

These simple differences in phrasing show the underlying charism of gentleness.  A correction is given through a gentle nudge, and a "command" is given which sounds like a little question.

In the world, it might be challenging to use this "gentle phrasing" as it could easily be blown off as unimportant or lacking firmness, but I would say that if you use them with love, it is not the force of the command, but the tug upon the heart which will move a soul to do any particular action.  This is what we are all called to do.  To respond to the movements of our heart and the gentle tug of the Lord who often speaks, even direct and strong commands, in a gentle, peaceful and unassuming manner.
Posted by Sister Margaret Joseph at 4:04 PM No comments: